The secret life of turtles

For new divers, turtles are frequently the star of the show.

They are slow moving, easy to observe, and passive when encountered. And, they are just plain cute! Sadly, Six of the seven known species of sea turtles are threatened, or in decline due to pollution, habitat loss, overfishing, and changing ocean conditions. Worldwide efforts to protect these threatened marine reptiles are increasing, and in some areas turtles are making a slow comeback.

Not only are sea turtles adorable and fun to interact with, they also play a vital role in the ocean ecosystem. Found in warm coastal waters worldwide, you can encounter turtles on most tropical dive holidays. Some areas of southeast Asia and the Caribbean are well known for their populations thanks to breeding programs and hatcheries nearby. Many of these activist run organizations offer informational tours, and opportunities to sea hatching events. Contributions to local conservation efforts are always a nice idea, and encourage a future in which divers will continue to encounter these unique ocean dwellers!

Each year, female sea turtles haul themselves onto the exact same beach in the dead of night and dig their nests. Using their flippers, they carve out a pit of wet sand to create a hole for their soft-shelled eggs. Once the nest is filled, it is simply covered with sand. The entire process takes less than an hour, and the female immediately returns to the ocean leaving her offspring to fend for themselves. These nesting nights, known as arribadas draw hundreds of turtles to the same beaches again and again.

Conservationists frequently guard nesting beaches during these events, as females are likely to abandon their nest if they are disturbed while laying eggs. Poachers are also likely to spot the fresh nests and dig up the turtle eggs to sell or eat.

About 60 days later, all of the surviving sea turtle hatchlings emerge from their buried nest and run to the ocean in one large group. This original journey down the beach is filled with danger. Predators are also aware of these yearly hatchings, and are on the lookout for an easy meal.

Young turtles can also become disoriented or dehydrated and perish in the sand before they reach their first wave. Only about one in every 1,000 of these defenseless babies will survive its next few years in the open ocean to reach maturity. Little is known about the life of these hatchlings. Once they enter the ocean for the first time, the vulnerable juveniles seek out large mats of floating sargassum or seaweed to hide in. It is believed that this environment enables baby turtles to evade predators and find food.

Researchers also think that young turtles prefer to stay in strong currents such as the gulf stream to ease their migrations. Though, the first few years of a turtle's life remain more or less a mystery because they are so rarely seen!

After several years of floating, known as their pelagic stage, young turtles are finally large enough to venture back into coastal waters. At this time, they will find a new feeding ground and remain there throughout their life with the exception of migrations for breeding and nesting. Despite their poor vision, sea turtles are expert navigators and return to their same chosen environments year in and year out. This is most likely due to their ability to sense the earth's magnetic field, and use it to determine location. Currently, scientists are using satellite technology in an effort to learn more about turtles migratory patterns. Monitoring these routes could aid conservation efforts in the open ocean.

Sea turtles breathe air on the surface unlike most other ocean animals. While they spend most of their time underwater holding their breath, they are forced to come up for air occasionally. Once a turtle surfaces, it will take one giant breath and dive. While swimming, turtles must come up at least once an hour, but while sleeping they can hold their breath for between four and seven hours!

Unfortunately, surfacing to breathe is a risky operation for turtles in many places. If caught in a fishing net, they are unable to surface fully and drown. They are also in danger of collisions with boats on the surface.

Turtles are omnivores, and eat a variety of undersea plants and animals. Sponges, seagrasses, seaweed, and jellyfish make up a majority of their diet. As turtles graze on seagrass, they promote more to grow. Likewise, their foraging on the coral reef may look destructive, but offers many opportunities for other reef species to flourish. These are also excellent opportunities for divers to passively observe turtles and take photographs!

When encountering a sea turtle underwater, divers are encouraged to keep their distance. Chasing and swimming directly above a turtle can cause it to become exhausted, or even to drown. Of course, touching and grabbing can also cause undue stress and harm. Because it was designed to break up coral, the turtle's beak can deliver a very strong bite. While they are not known to behave aggressively, any animal will attempt to defend itself when harassed.

To get the best possible photos of turtles while diving, you should approach slowly. If possible, swim toward them from the side to avoid startling them away. Then, just maintain perfect buoyancy and hover in place while you watch and wait for the perfect shot! Turtles are curious, and may even come take a closer look at you if you wait for a few moments. 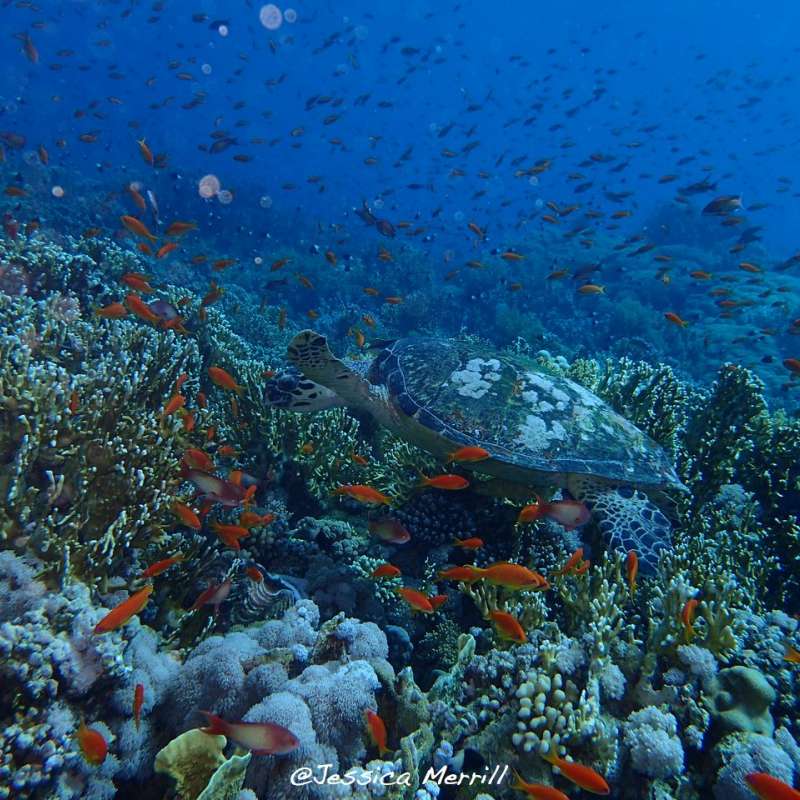 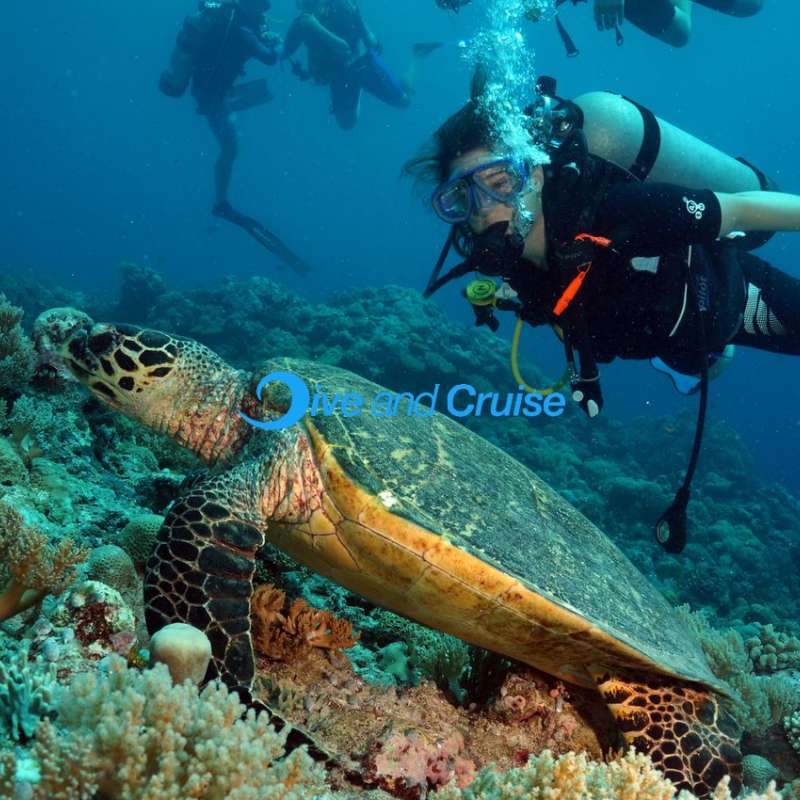 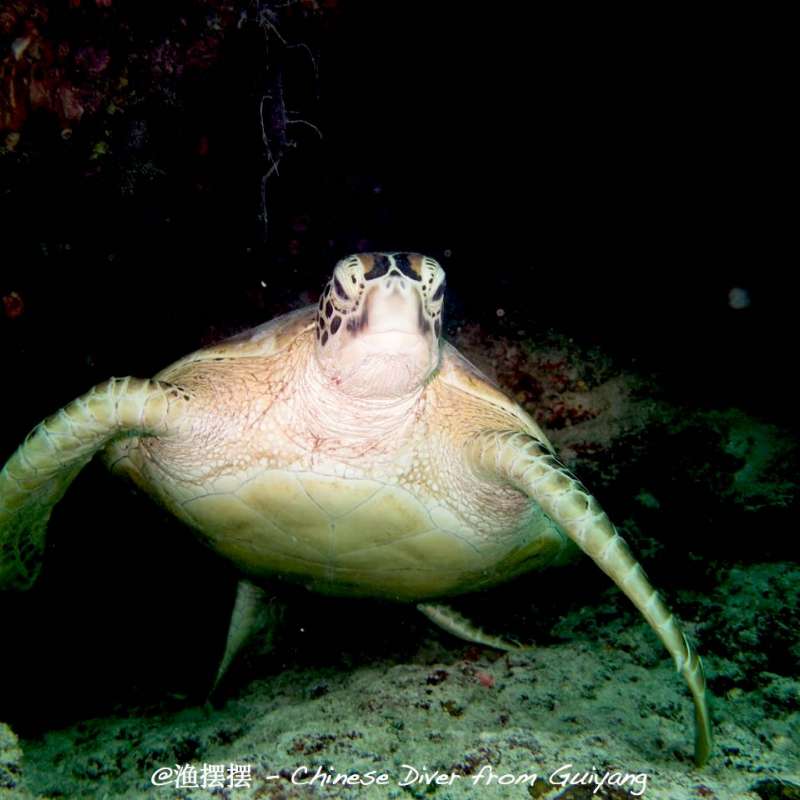 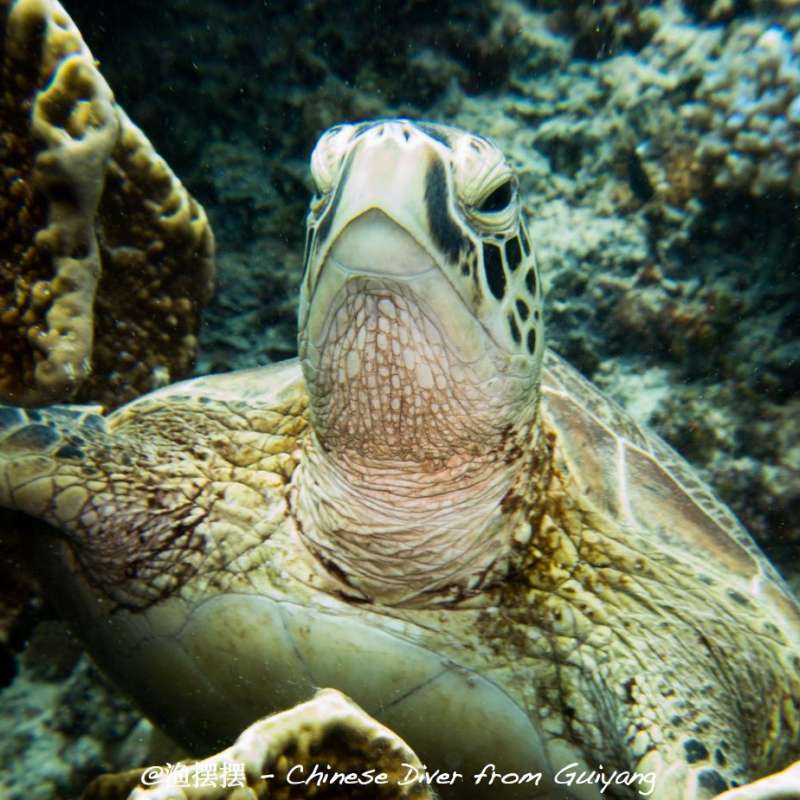 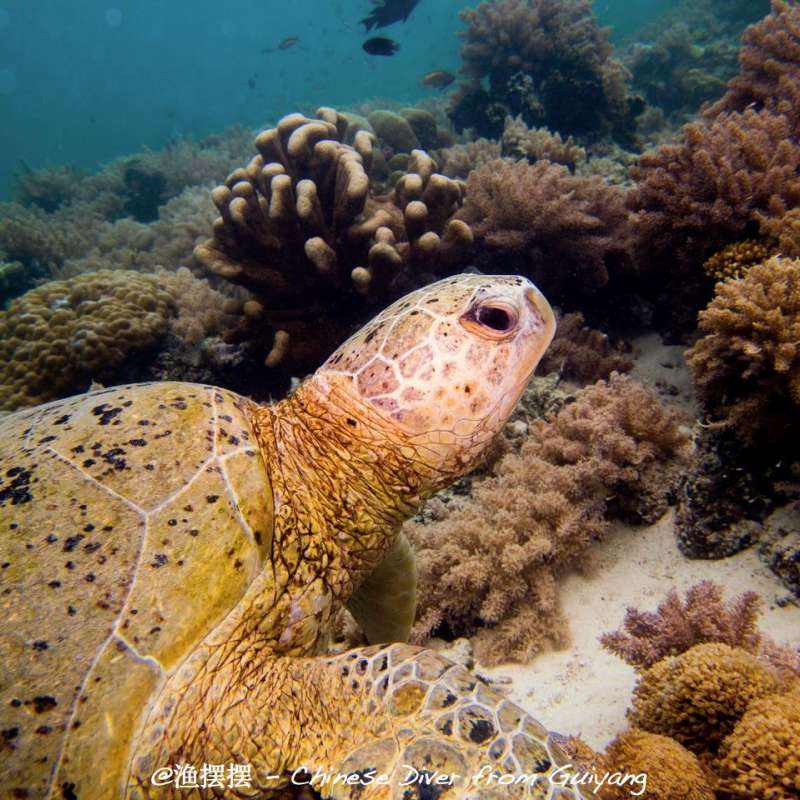 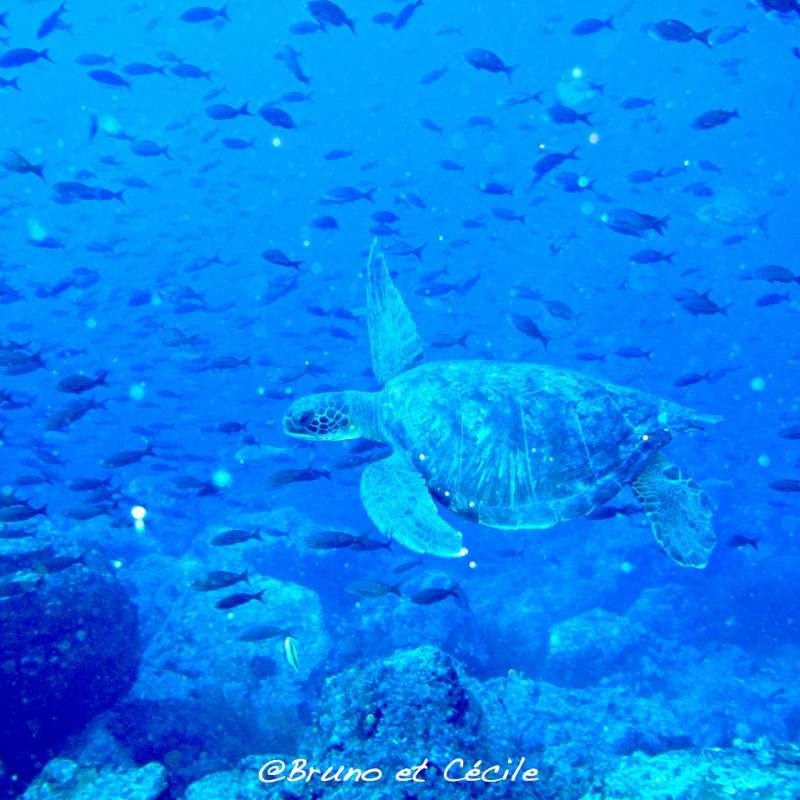 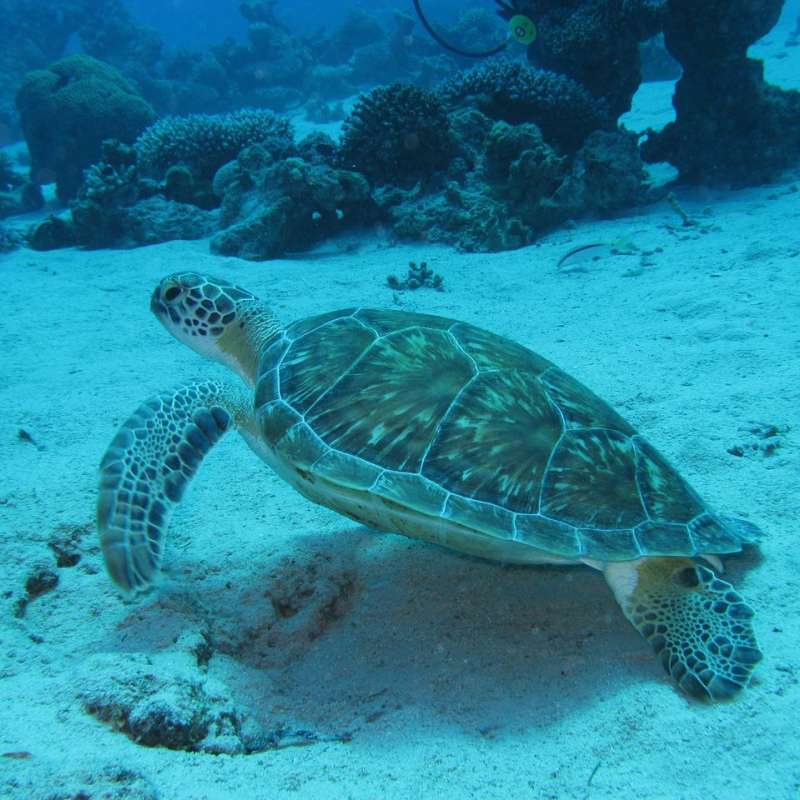 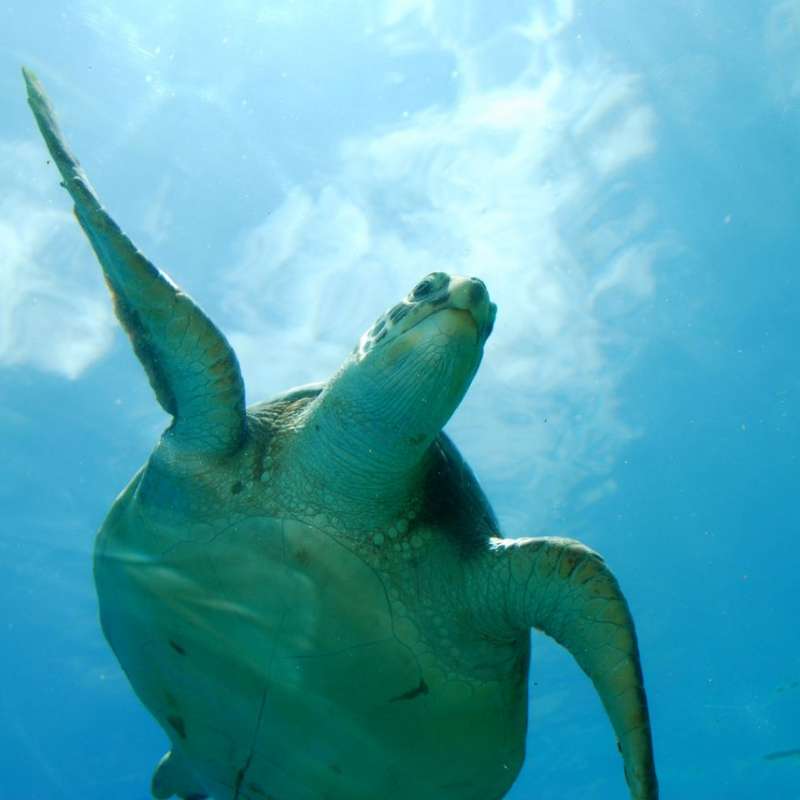 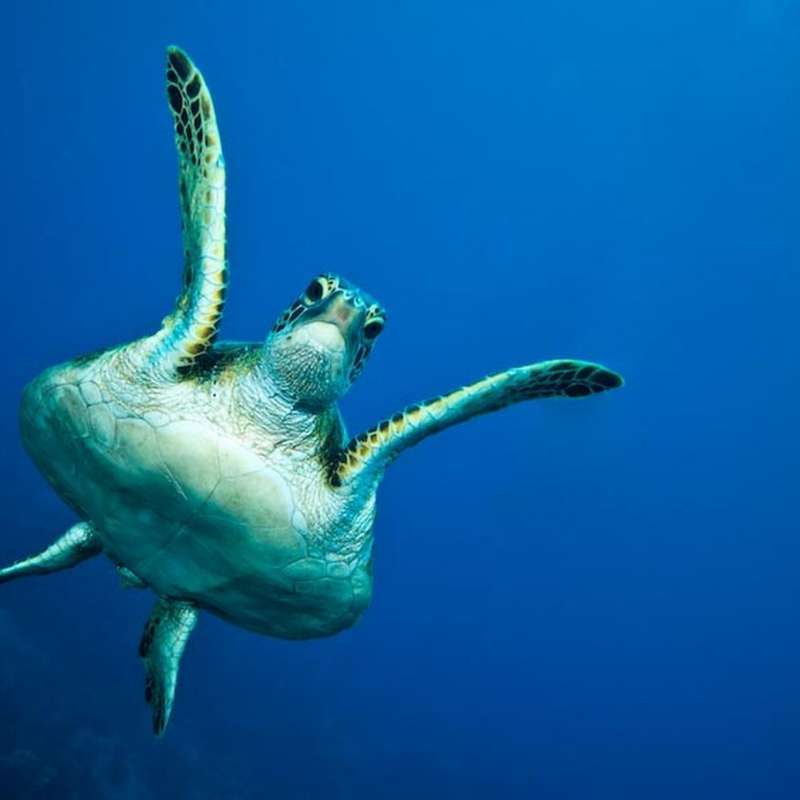 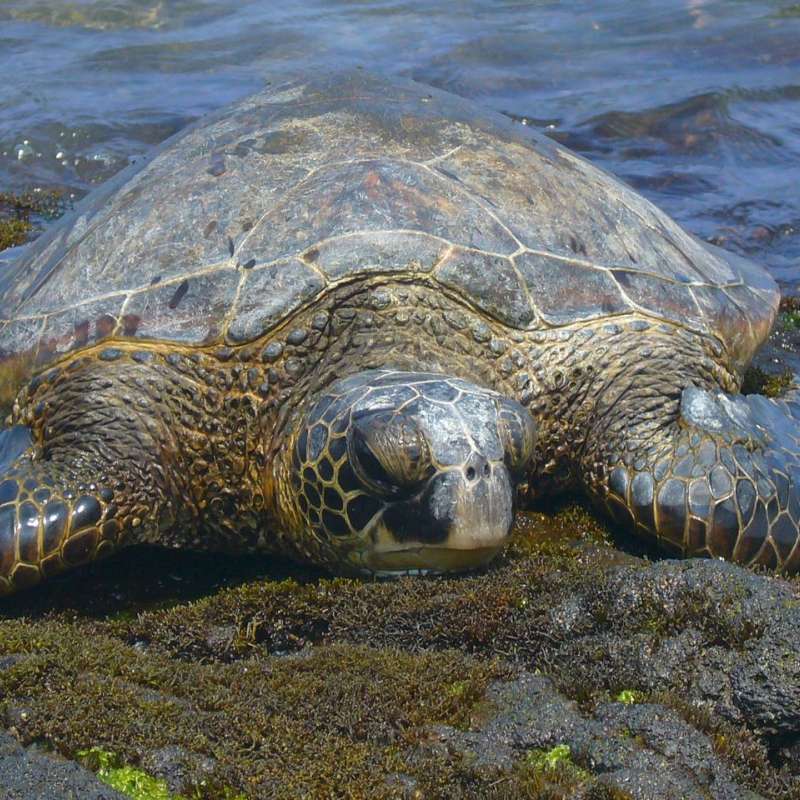 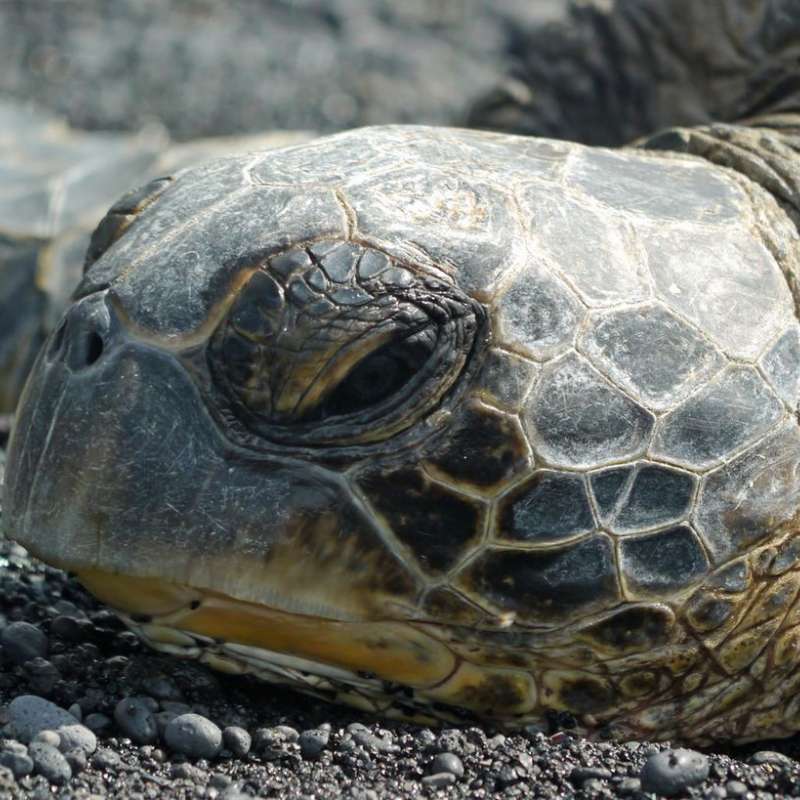 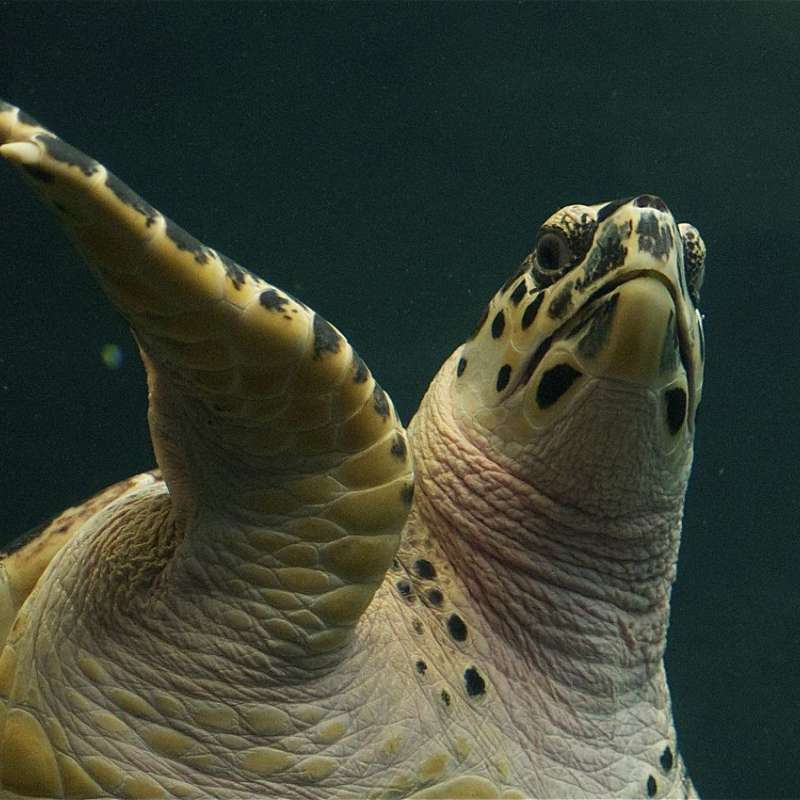